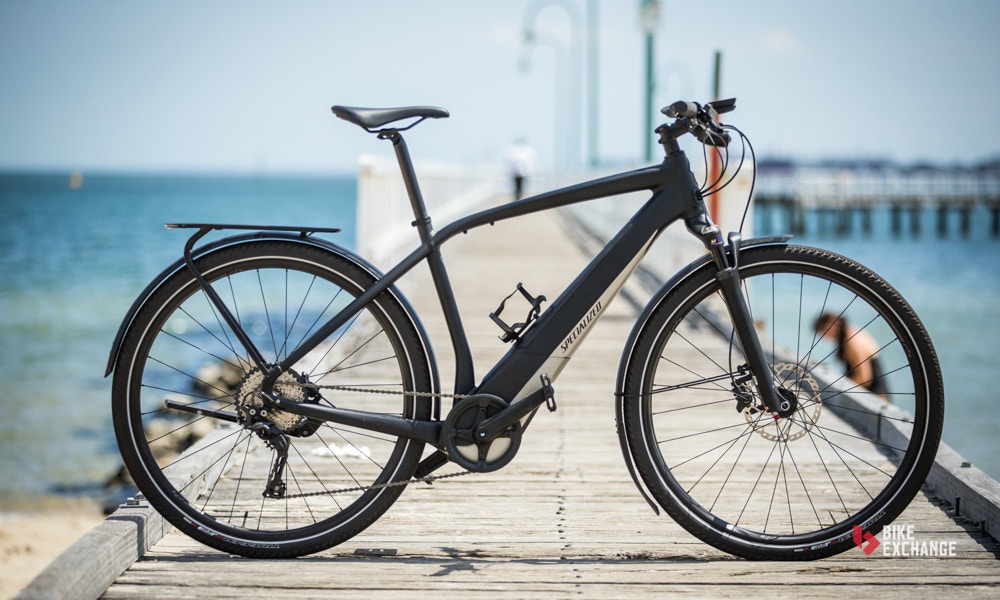 Far from being a niche category, the rise in popularity of e-bikes on a global level is near impossible to ignore. With an e-bike, no longer is the idea of commuting to work accompanied by the vision of arriving at the office dripping in sweat and in desperate need of a shower. Instead, the idea of an e-bike has opened up commuting to a wider audience whom would have shied away from a bike as a viable transportation tool or even as a leisure activity in years gone by.

After initially entering the e-bike market with the Turbo S in 2013, Specialized has continued to evolve and improve its e-bike offerings with the current range now catering to both commuters and mountain bikers alike. The latest iteration of its leisure-come-commuter steed wears the Turbo Vado moniker and arrives with an updated aesthetic, pimped out component list and promising levels of performance from the Brose-based proprietary drive unit. 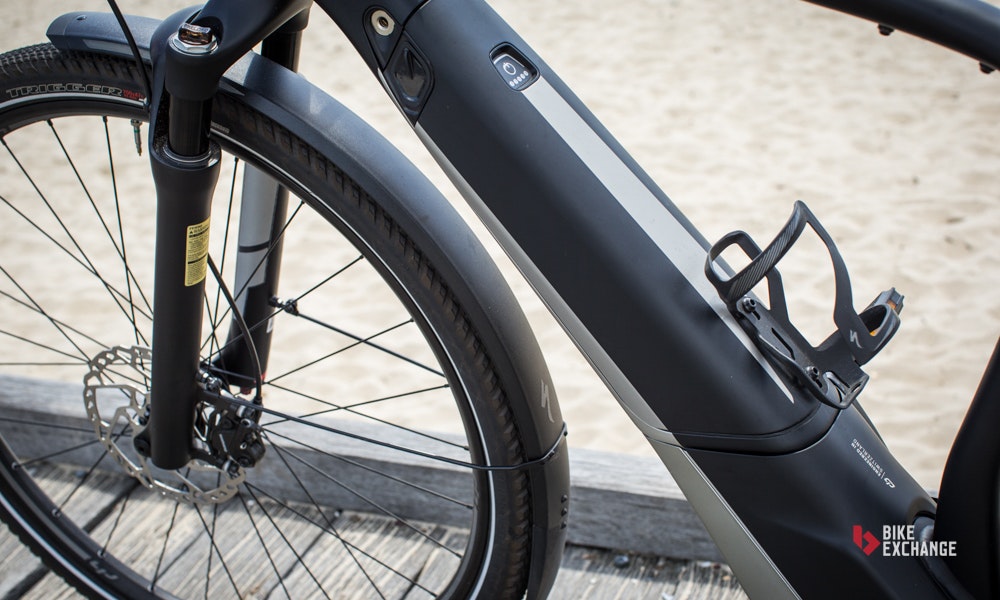 The Turbo Vado 4.0 sits at the top of Specialized’s commuter e-bike product line up with a slightly muted 3.0 model sitting below. Both models make use of Specialized’s own E5 aluminium, with the frameset featuring a bespoke cutout on the down tube that integrates the battery and drive unit seamlessly into the frame itself.

The frame has an unsurprising quality and sturdiness to it, as expected on a premium e-bike offering such as this. Whilst the Turbo Vado does not feature the D'Aluisio Smartweld Technology typically found on other high-end Specialized aluminium frames, the welds on our test bike were smooth, neat and consistent. A Suntour NCX E25 fork sits out front offering 50mm of travel to provide a little more comfort over less than ideal roads and bike paths.

The frame itself features internal routing for all cables and wires running to the back of the bike. It's a nice touch that completes the stealthy, super-commuter aesthetic of the bike. Fender and rack mounts are also present (and in use).

The geometry of the large Turbo Vado we had on test blurs the lines between a semi-aggressive mountain bike position and that typically found on an [urban bike]. Stability is on offer in spades thanks to the 1152mm wheelbase and low centre of gravity offered by the extra weight of the drive unit located in the bottom bracket (between the cranks). The long chainstays (478mm) keep unassisted acceleration snappy enough whilst the relatively short headtube (145mm), at least for a commuter bike, ensures the rider is both upright and comfortable, yet far enough forward to be able to negotiate sharp turns and traffic with ease.

(Our Australian-delivered Turbo Vado 4.0 is powered by Specialized’s own 1.2 Brose-based internally belt driven power unit delivering 80nM of torque and 250watts of assistance to the rider with a maximum assisted speed of 25km/ph.

While not compliant with Australia standards, globally more powerful versions of the Specialized 1.2 drive units exist that conform to their respective countries legislation on e-bikes. In some cases, these offer up to 350 watts of assistance with a maximum assisted speed of 45 kph, or 28 mph for those of you in the land of the free... USA).

The Turbo Vado offers up three levels of assistance to riders; Eco, Sport, and Turbo, approximately delivering 25, 50 and 100% assistance respectively. As you progress through the assistance levels, the Specialized developed Rx city tune adjusts its algorithm to provide increasing levels of torque and pedal response.

A proprietary 504Wh battery serves at the fuel tank on the Turbo Vado with Specialized claiming a maximum assisted riding range of 170km from a full battery in eco mode, assuming a 75kg rider and a mostly flat terrain with nothing more than a light breeze blowing.

The stem-mounted 2.2" BLOKS LCD display displays basic metrics to the rider such as mileage, speed and time elapsed and boasts integrated features including a USB plug for on-the-go phone charging as well as a handlebar based remote for cycling through the screen as well as altering the assistance level of the motor itself. 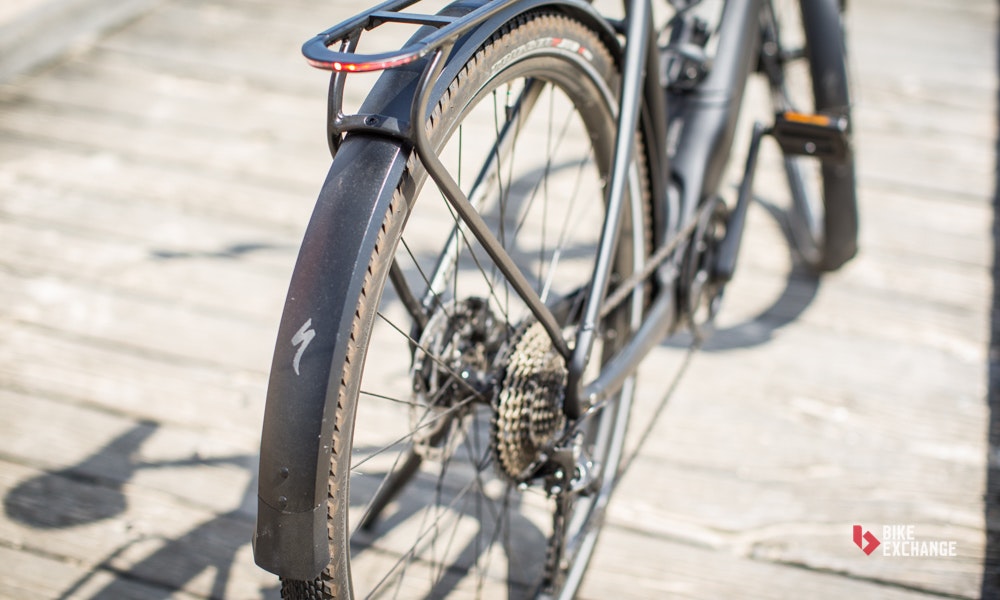 The Turbo Vado 4.0 came equipped with a mixed Shimano SLX and XT 1x11 speed drivetraincomponents, including a 40t front chainring and a wide-range 11-42t rear cassette. Stopping power is taken care of by Shimano's reliable Deore hydraulic disc brakes. The increased stopping power on offer from the bitey 180mm disc rotor up front is a nice touch, particularly given the Turbo Vado is destined to be ridden on shared paths with unpredictable pedestrians and other cyclists alike.

The 1x11 gearing set-up (one chainring at the front, 11 at the back) leaves riders with ample gearing to get up all but the sharpest pinches without breaking a sweat. For those riders unlucky enough to run out of juice and have to pedal home sans assistance, the wide gear range on offer should provide riders with an easy enough gear to spin home without too much effort, however, the additional weight of the bike will make it a slog if faced with a hilly commute. 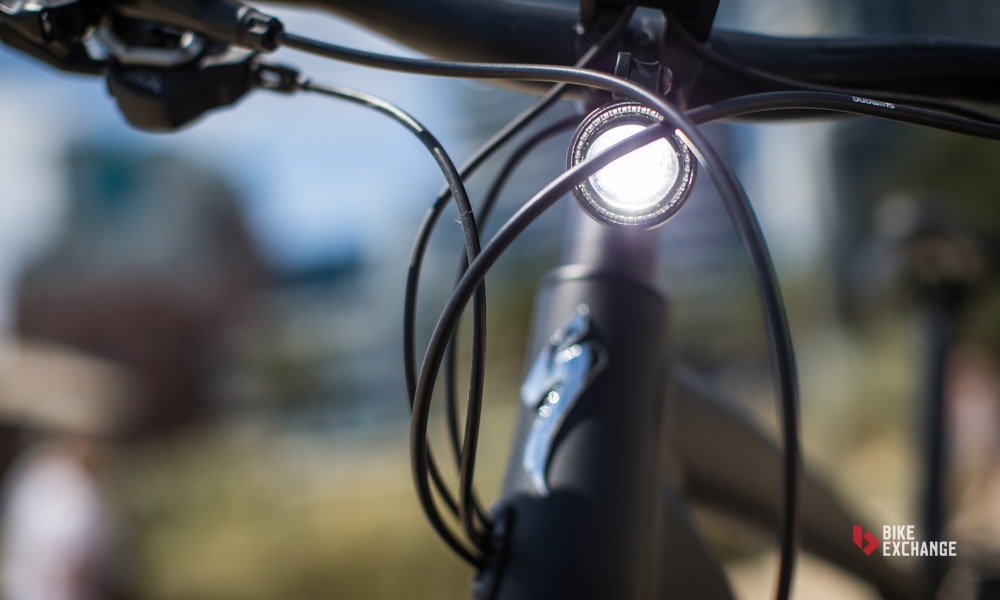 The Turbo Vado features an impressive specification list that immediately ticked all of the boxes with regards to what we want, and expect from a commuter. Specialized have outfitted the Vado with an integrated LED lighting system with a corner tracking aspherical lens up front with the rear light integrated into the RackTime Match-It rear rack.

The integrated fenders are also a proprietary affair and cover an impressive amount of both the front and rear wheels. The fenders themselves feature additional width at the base of the guard itself so as to channel water away from your legs.

Finishing components comes courtesy of Specialized. In-house 680mm wide alloy handlebars fitted with Body Geometry Contour grips give the rider a firm grip of the bike whilst own brand alloy stem, 30.9mm seatpost and a Canopy Comp saddle round out the package. 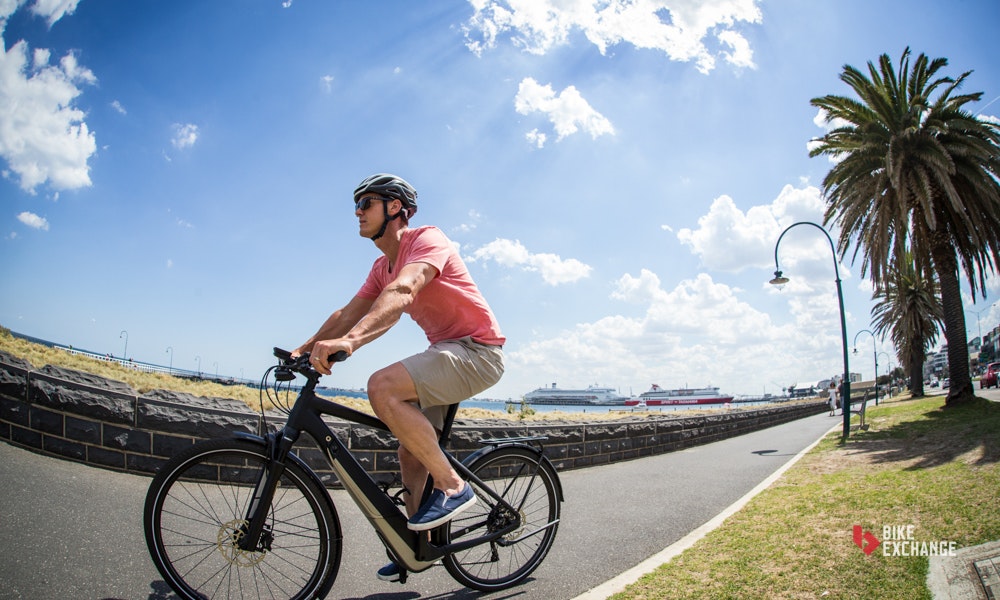 Rather than simply make a frame that could be fitted with a unit from the likes of Bosch or Shimano, Specialized set about integrating the motor and battery into the frame itself. The result is a stealthy, good looking aesthetic that in no way, shape or form screams “e-bike”, rather looks the part of a stylish commuter. Thanks to the internal belt drive motor, the bike, simply put, was a joy to ride with near silent, smooth and refined power delivery.

A full charge of the 504Wh battery takes a little over three hours from completely empty. The simple charging procedure of the bike is a bonus too, with the battery running everything on the bike, including the head unit, integrated lights as well as the drive unit. Our only gripe is the range, with a full charge granting an operational range of 50-60km (toggling between Eco and Sport mode), granted it was enough to commute to work and back, but it means that lunchtime commutes into the city, or down to the cafe often needed to be taken unassisted.

The corner tracking aspherical front headlight is a stand out for our main tester who has been riding the bike through the depths of the Australian winter. The integrated rear light also offers additional brightness when the brakes are pulled, just like a car or a motorbike. However, it’s worth noting that there is no flash setting for the lights, front or rear. 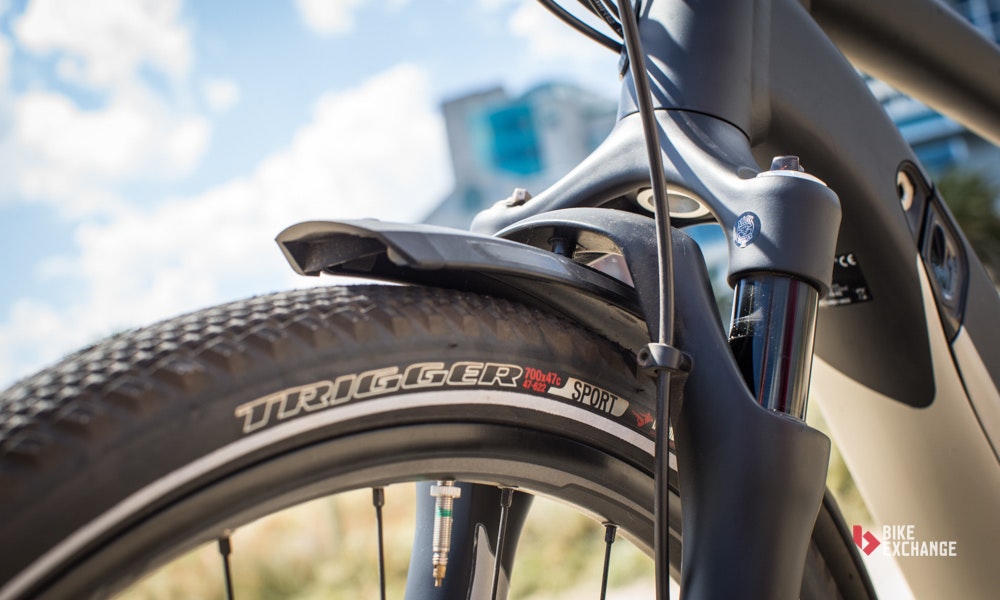 The handling of the bike felt at home navigating the rather sedate bike paths around Melbourne and yet was equally as adept at weaving through traffic, somewhat surprising given its 23.7kg weight. Riders coming from a mountain biking background will appreciate the additional width on offer at the handlebar along with the slightly more aggressive mountain bike based riding position. Placing the rider upright and forward, it’s not all that far removed from the “attack” position often adopted out on the trail.

The groupset fitted to the bike is, as you’d expect from Shimano, superb. Shifting was crisp and precise, however, those lacking in mechanical sympathy are likely to put the chain and groupset underload if it isn’t shifted routinely, prematurely wearing the drivetrain. Braking power on offer is more than capable of bringing the Turbo Vado to a stop in a hurry if need be.

The 700c disc-specific wheelset came fitted with Specialized’s own Trigger Sport Reflective 47c tyres and were quite simply bombproof during the six month long testing period. The reflective decals on the sidewall of the tyre are a nice touch, providing additional visibility when riding in low light conditions. However, the lack of quick release thru-axles for the wheels limits the ease of transportation and may provide an issue should you succumb to a flat tyre – it's a trade-off for the improved theft proofing of parts.

Contact points fitted to the Turbo Vado are of expectedly good quality, but those used to a firmer perch may find the Canopy Comp saddle a little overly plush. Although this is a minor gripe, as saddle preference is as personal as music choice. 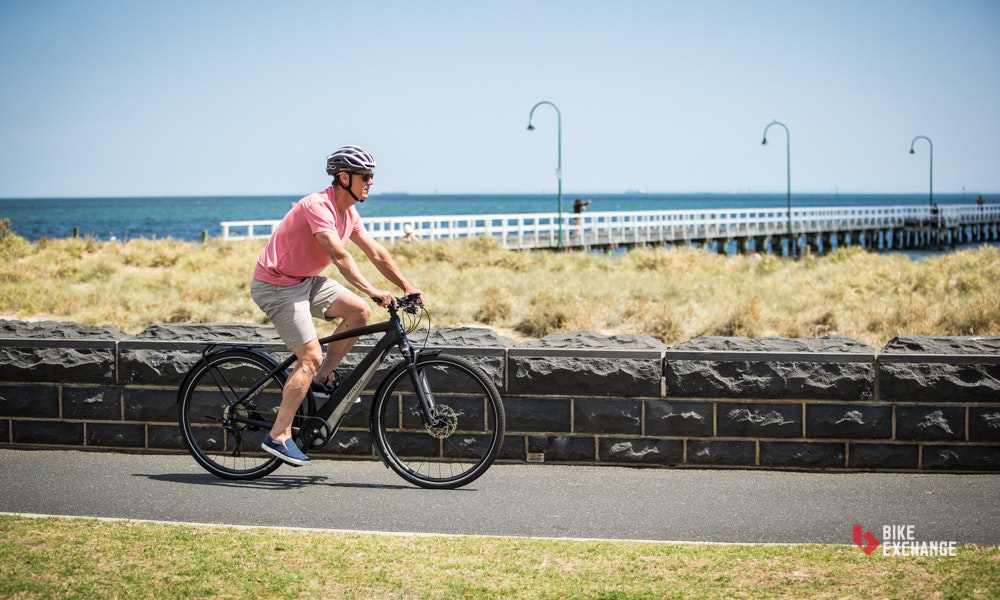 The obvious elephant in the room that this bike and many of its competitors will attract criticism over is its price tag. The Turbo Vado 4.0 isn’t exactly what you’d call cheap however, consider exactly what an e-bike provides for this type of coin versus the alternatives and it begins to look a lot more attractive.

Our mates over at CyclingTips recently pondered whether this very bike could indeed replace a second family vehicle and on paper, given the right circumstances, it’s hard to argue the facts. For one there are no registration fees to pay; the cost of a full charge of the battery costs less than a dollar's worth of electricity; and if you live in a city, the only traffic you're likely to contend with is other like-minded cyclists.

Quite simply, as a commuting tool, it makes perfect sense and regardless of your individual position on e-bikes, I implore you to simply go out and try one... it very may well change the way you live your life for the better.

This article was written in collaboration with Wade Wallace of CyclingTips who provided his own ride impressions. Imagery courtesy of Tim Bardsley-Smith 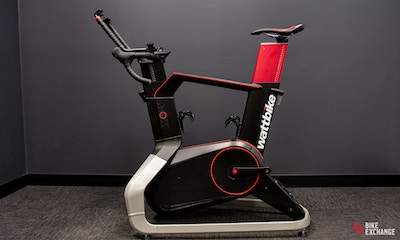 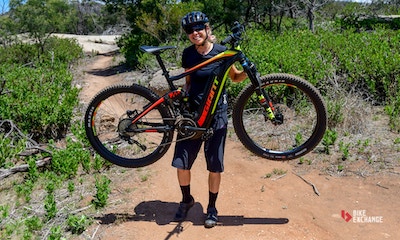 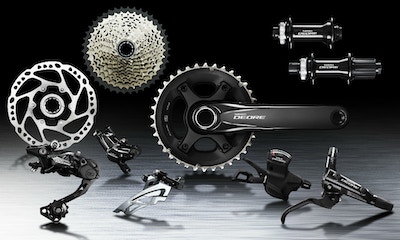