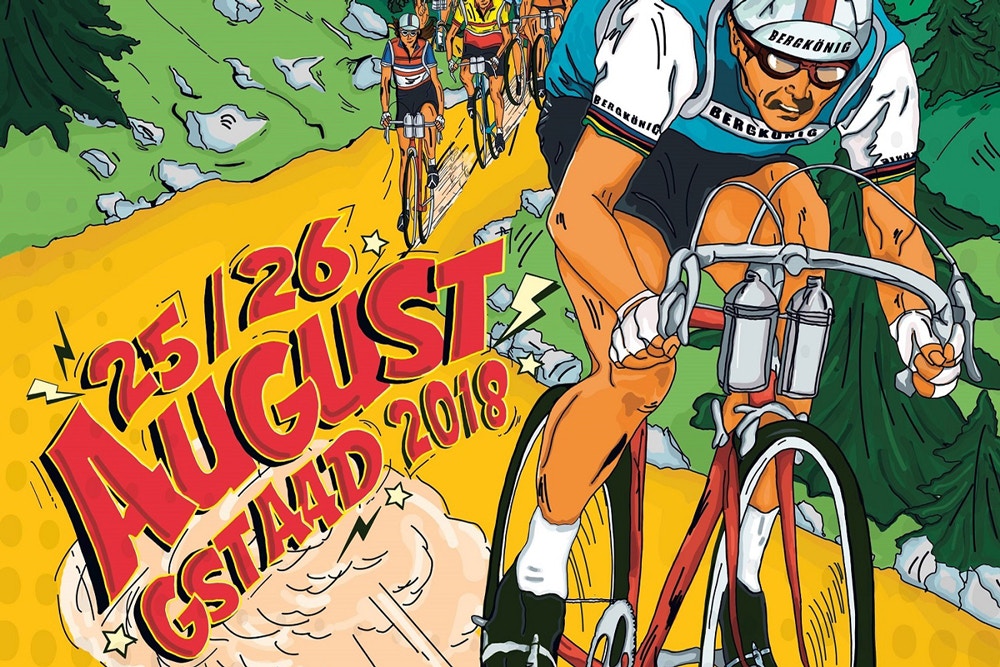 Richard Lofthouse explores one of the best kept secrets of the vintage cycling scene, this one in the formidably high Swiss alps of the canton of Bern.

Apart from meaning ‘King of the Mountain’ in German, what’s the Bergkönig when it’s at home?

Founder and Swiss vintage bike collector Alex Beeler and his wife Francesca (pictured above) watched the development of the Italian Eroica, where riders compete on rough roads with old school steel frames and downtube shifters.

Knowing that Switzerland has a complete back catalogue of artisan frame builders and bicycle innovation, to say nothing of world-class racers from Hugo Koblet to Fabian Cancellara, Alex decided from his base in the fabled alpine chalet village of Gstaad to bring vintage bikes to the high alps.

The first edition of the Bergkönig took place last August, and scored such a hit that it will double in size this year to 500 riders, who will congregate at the start-finish line in Gstaad on August 25-26, 2018.

Having ridden all the routes offered including the ‘big round’ of 102kms and 2,400-metres of climbing, we can offer some notes on what makes the event special.

Fancy some artisan cheese for your jersey pocket? What about a Swiss boutique brew at the finish line?

First of all, Alex has paid fanatical attention to local detail. When you encounter cheese at a feed station, it’s delicate rolls of high alp cheese only made from milk from cows grazing at very high altitude, a production method governed by Swiss law and particular to this valley. The beer at the end was a sublime brew made by a micro-brewery in neighbouring village Saanen. This devotion to place and geography characterised the whole event from beginning to end, so much so that I began to think of it in the sort of language used by wine tasters who bang on about typicity and terroir. The plan is not to grow big but to preserve an unusual sense of quality framed in an atmosphere of friendliness.

You're among fine cycling pedigree...

The Bergkönig wasn’t the slightest bit stuffy despite starting off with a sprint up the hill to the Palace Hotel in Gstaad and champagne. But if it wasn’t elitist it had a splash of the elite about it, for who was on the start line but two former world champions, Urs Freuler (Atala) and Gilbert Glaus (Cilo-Aufina).

There's vert for everyone

These guys will lead out a couple of hundred hardy alpinists promptly on the Sunday morning, while a clutch of other routes allow families to take part to their own schedule throughout the day, and more fragile machines to be run in nearby valleys that never go too far away from Gstaad. Having ridden all of them, we can say confidently that the easier routes are still a delightful but manageable challenge, while the big round is idyllic and beastly by turn. The latter, dubbed ‘the Big Round’, takes in some very steep ramps that will have you walking if your lowest gear is 42x22. While less than 2% of it is graveled, that’s not to say that the roads are easy. These are not the sweeping, smooth roads you may have come to expect of Switzerland, but tiny, bumpy and quite technical farm tracks and minor lanes. The descents are hairy so your tyres need to be properly pumped up and the brakes fully competent.

Let's ride - here's where the route will take you

The start is fantastic with an undulating descent down a valley to Montbovon. This is where you can feel your way into the event, look around at the mosaic of beautiful little farms and spot raptors hovering about the woods and domestic cats lying in mown grass sunning themselves. Eat some Alpenmilch chocolate why not?

At Montbovon you hook a sharp left and then the fun begins with an 18km climb up to Lac de l’Hongrin. The funny thing about this climb is that it begins deceptively. You conquer this little ramp and that little ramp, while the woods are pleasant. But as you exit those woods you’ll taste the Bergkönig for the first time, and your legs will be working at 9/10.

As you reach the dam you feel at the top of the world and can enjoy a schlepp right round the lake, on a level-ish road. At the furthest extent you take a right turn by a military college adorned with a tank and lots of military G-Wagens.

More beautiful roads sweep around the other edge of the lake before a sharp left turn at roughly the halfway mark, 50kms. Now for a monster ramp towards Pierre du Moëlle, the road so tiny that it barely permitted the weaving we resorted to in order to keep going in our lowest gear, 42x26.

Views up the top are unbelievably pretty and you feel on top of the world. The descent is vicious and you can’t enjoy it quite, because the road is far too narrow.

Then the route picks up a larger road here and a smaller road there, and threads a necklace of classic Swiss villages before you confront what is undeniably the set piece climb of the whole route, the very steep, 7km long ascent to the ski station at Iserau. Conquer this and you’ve conquered the Bergkönig. A swooping descent follows, and then eventually a return to a very smooth, wide Swiss road that descends all the way back to Gstaad, making you feel like a returning hero and probably engaging your big ring in earnest - and for the first time all day.

NOTES: Riders for 2018 will be capped at 500 so don’t wait to book. There is advice on how to rent a suitable bike at the main website or via the organiser, at: