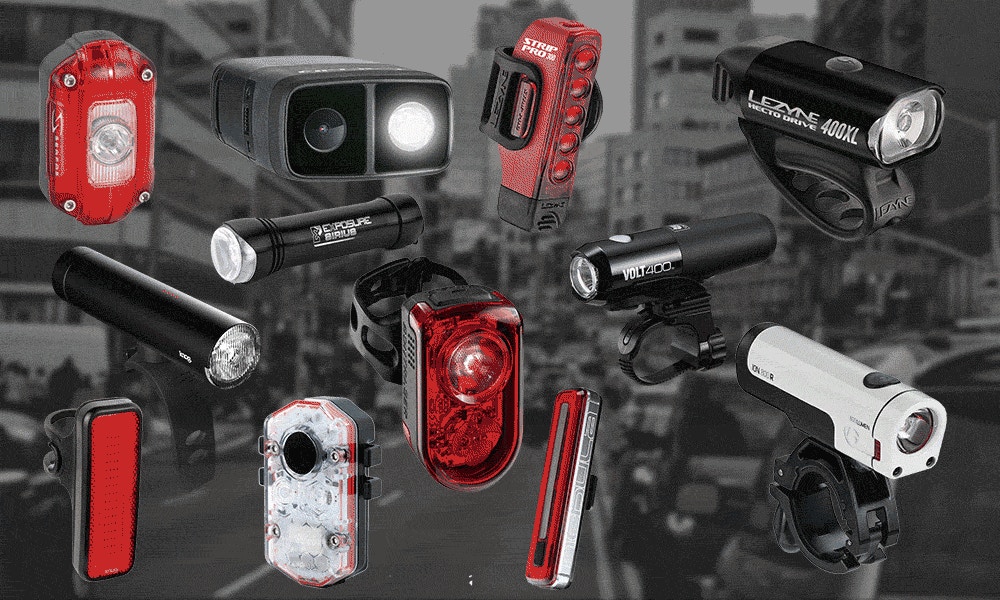 There’s little denying the benefits of riding with bike lights at night, but with a reported eight out of ten cycling accidents occurring during the day, the use of lights during the day is the number one thing cyclists can do to make themselves safer according to a Denmark-based study.

This may be a foreign concept to some, but morning road cycling groups have been taking to daytime lights in droves over the past year or two. Any additional awareness given to other road users can only be a good thing.

The “be seen” category of lights is now definitely up and running with many of the big lighting brands offering a flexible solution that caters to both day and night time use. According to Bontrager’s white paper on the matter, to classify a light as one suited to daytime use, it needs focused optics, an interruptive flash pattern, and a visible distance during the day of at least 400 meters. That’s a lot of light!

Lights that lack power at night will be drowned out in the daylight. Due to this, the best daytime lights have reduced “night time” settings so as not to blind other road users once the sun goes down.

With daytime-specific lights in use, Bontrager claims – “Using a flashing tail light in the day makes you 2.4x more noticeable than with no lights at all and 1.4x than in steady mode.”

In addition to flashing lights, a collection of external studies has suggested that highlighting moving limbs and wearing contrasting colours are the other (albeit less effective) elements to being seen on the road.

Due to the greater power demands, you’ll see all selected models feature LED technology and USB-rechargeable batteries. And if you want a comprehensive rundown of all bicycle lights, including commonly used terminology, check out our Ultimate Bicycle Light Buyer's Guide.

See below for our picks of the best small and relatively cost-effective front and rear light options that are well suited to keeping you both seen and safe, day and night. 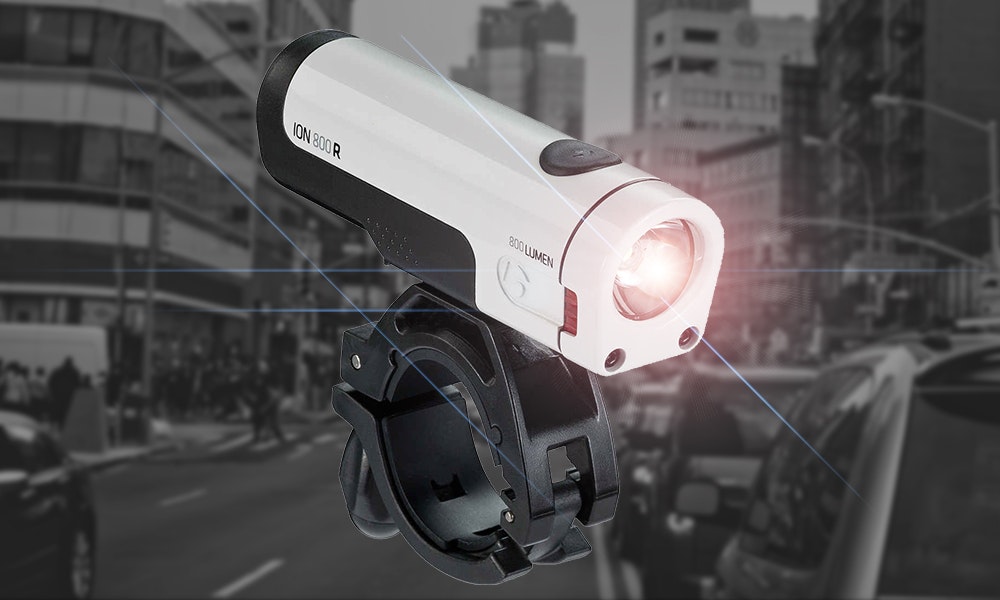 As the brand making the most noise about daytime lights, it’s a safe bet to assume that Bontrager’s Ion 800 R is up to the task of ensuring you’re seen.

Getting its name from its 800 lumen output, this torch-shaped model offers enough punch for up to 1.5km visibility in the daytime and lets you see where you’re riding once the sun goes down. The battery lasts for 20 hours on its brightest flash mode, or a respectable hour and a half when running constantly at 800 lumens.

The simple silicon rubber mount means the light is a breeze to install and remove, and our sample has held tight over pothole-riddled roads. If you’re not needing to see where you’re going at night, the Bontrager Ion 350 RT is likely to keep you just as safe. 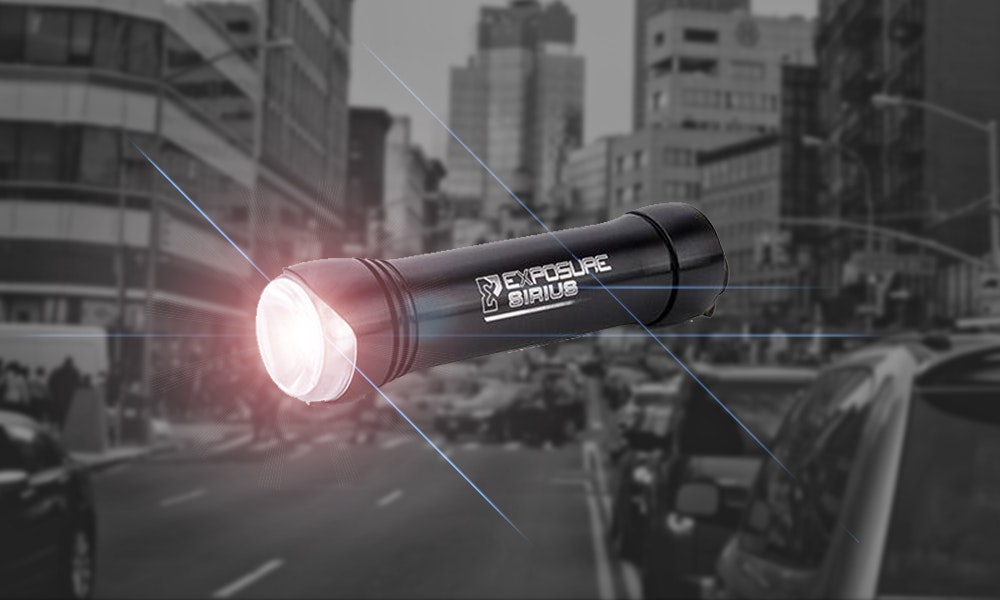 Exposure is one of the market leaders for premium sports lights and was perhaps the first to promote the idea of daytime-running cycle lights. With light housings made in the UK of machined aluminium, Exposure lights typically demand a higher price but still provide great value.

Weighing in at 84 grams, the Sirius is built specifically with road and urban users in mind. It offers a peak output of 575 lumens and its pulse mode is just the ticket for keeping you safe in bright daylight. The two-hour burn-time at full output and 36 hour battery life on flash mode are testament to the quality of these lights.

If budget is no issue, also be sure to check out other Exposure models such as the Strada 1200. 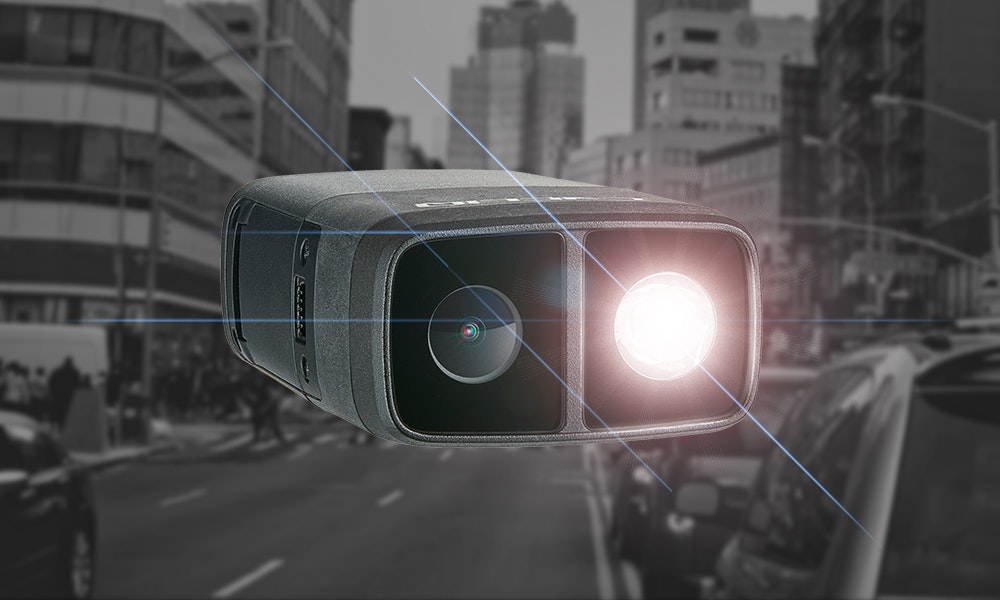 Released late last year, the Fly12 CE is the only product here that isn’t just a light. The Australian-designed Cycliq Fly12 CE combines a Full HD camera and powerful front light into one, keeping a safety camera running on what’s happening in front of you while making sure you’re seen. In addition to a safety camera, the bike lights also features an alarm feature should someone try to make off with your pride and joy at a cafe stop.

The light itself offers a peak of 600 lumens, while the video records at a maximum of 1080p, which is plenty to read number plates and reveal offenders. Most importantly though is that the camera offers automated looping so that it never runs out of recording memory, and there’s an incident save mode to ensure any critical footage is kept safe. 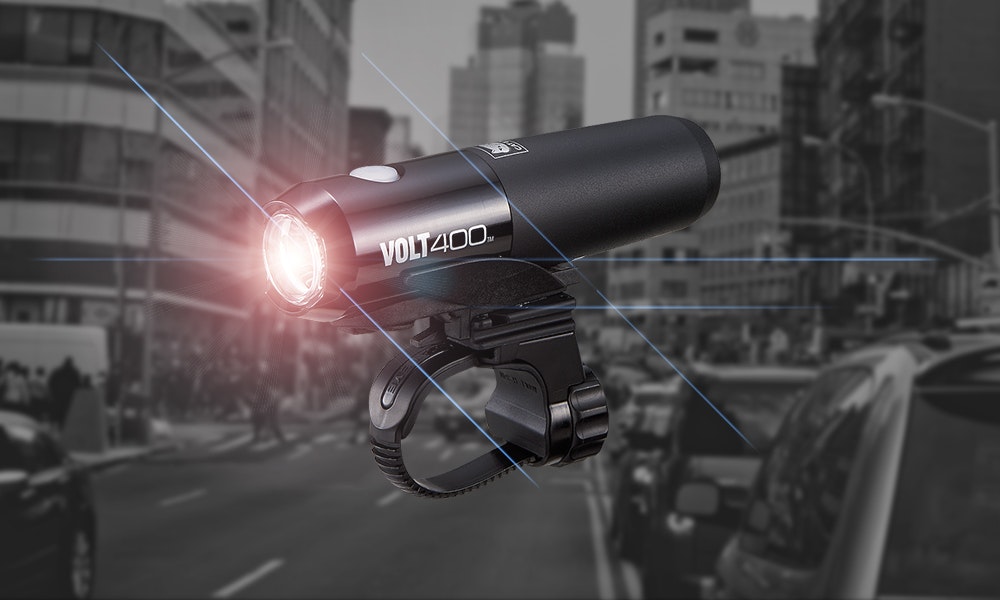 CatEye once ruled the lighting market and the Japanese company’s latest lights are helping them regain that name. The Volt 400 offers a 400 lumen peak output in a surprisingly slim package.

The ‘Hyper Constant’ mode is great for visibility, pulsing between 400 and 50 lumens for a total of 11 hours between charging. With a burn-time of three hours, the constant 400 output is great for seeing where you’re going after dark. 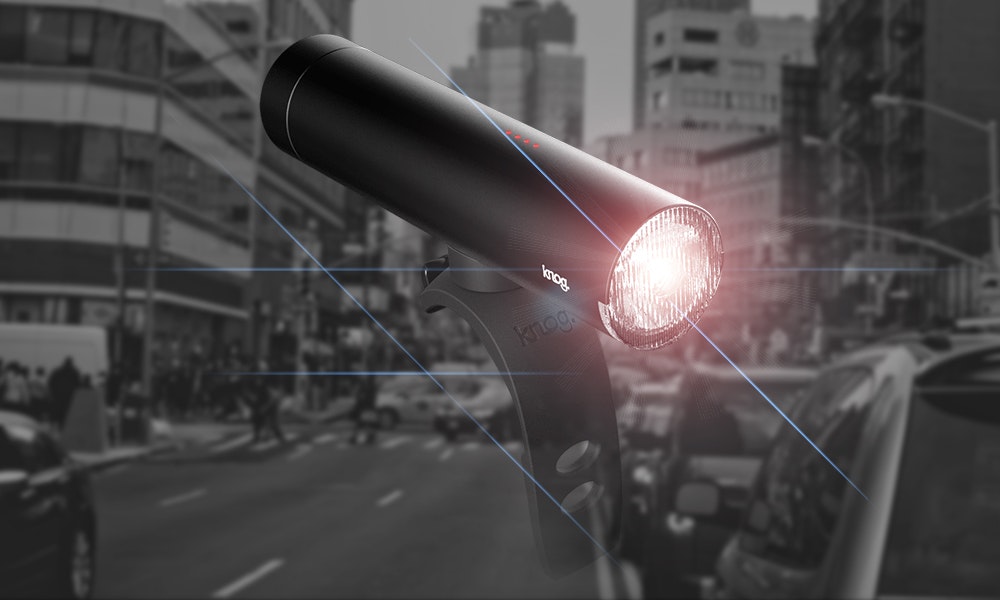 Based in Melbourne, Australian design brand Knog have been creating sleek and stylish tech for road, trail and outdoor use for over 15 years.

Part of the PWR range released in late 2017, The Rider is a feature packed multi-function light. As well as pumping out up to 450 lumens, the Rider gives users the option to program brightness and runtime through a companion app, then use your remaining battery to charge your USB devices. The light outputs in an elliptical beam for broader, brighter road coverage; has a two hour runtime at max 450 lumens and four smart battery indicator LEDs to let the rider know how much charge is left. 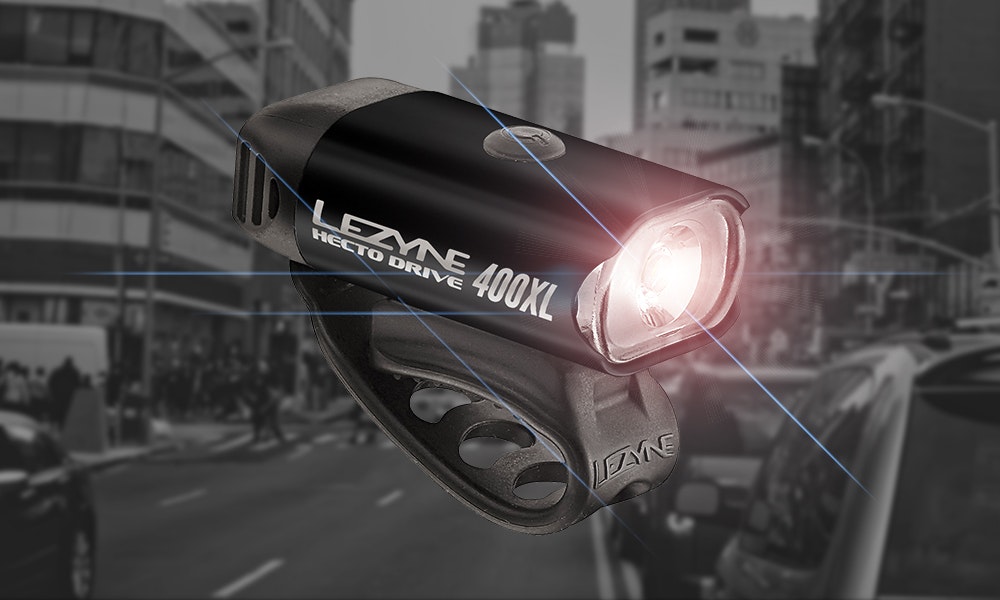 Best known for its range of high-quality cycling accessories, Lezyne have been developing quality LED cycling lights for seven years. With a range catering for everything from “be seen” flashers to lights capable of lighting up the brightest of spaces, the product line-up features a range of lights to suit all situations.

With a capable 400 lumen output and a robust anodized aluminium body, the Hecto Drive 400 XL features seven different output settings. With a burn time ranging from one hour at 400 lumens, all the way up to 17.5 on a lower output flash setting, the Hecto Drive is a great option for commuters transitioning between daylight and darkness.

All rear lights selected are designed to fit to a seatpost. Some lights also offer alternative mounting methods such as to the saddle, seatstay, saddlebag or backpack. 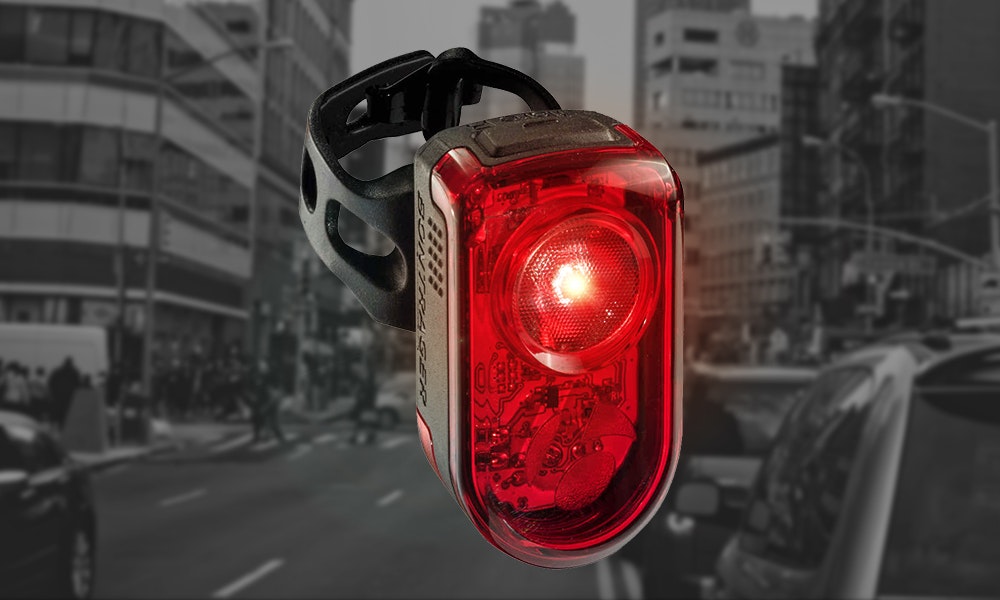 With 65 lumens of output and weighing just 58grams with its rubber mount, the Flare R isn’t just a solid, lightweight option, it’s also not greedy with its battery usage, offering just over four hours on its daytime-specific high-powered flash mode. A less aggressive night mode boosts battery to an impressive 23 hours between charging.

While it may look similar to many other lights on the market, we can attest to the fact that it certainly offers more impact. Bontrager claims the Flare R offers daytime visibility of two kilometres and five kilometres at night.

Like the front Ion 800 R, featured above, the simple silicon rubber strap makes moving it between bikes a breeze – something we all do plenty. 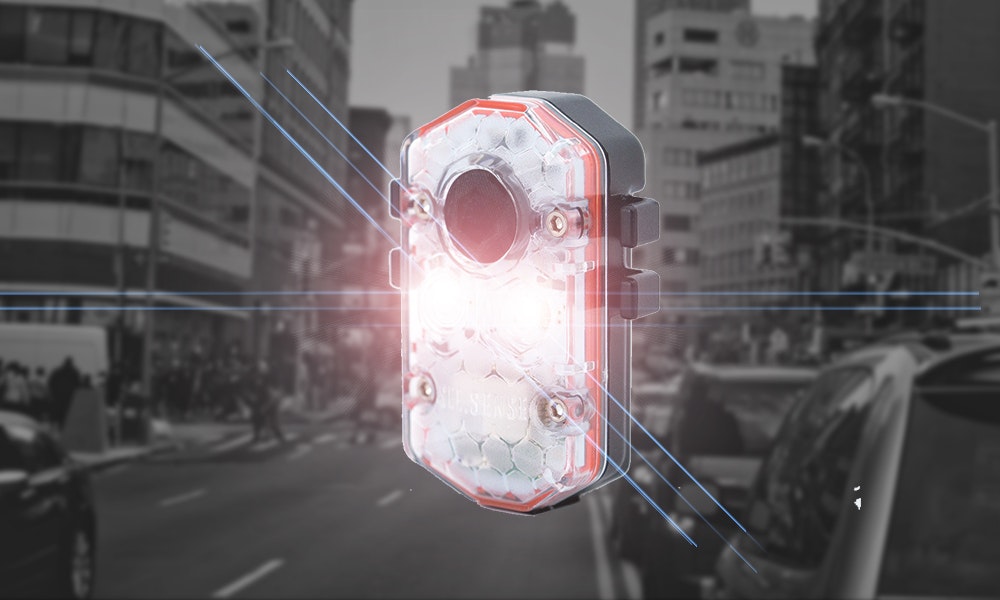 While it may be priced at a premium, See.Sense effectively created the market for smart rear lights. The new Icon+ model is 30% brighter than the original with an astonishing 250 lumens peak output.

A built-in accelerometer means the light powers on when you move, and powers itself off after three minutes of inactivity. Additionally, coming to stop, riding through roundabouts or car headlights approaching all trigger a brighter output too. And if that weren’t enough, it can be paired with a smartphone for bike theft and emergency-response crash alerts.

Built in Northern Ireland, this light is water sealed, weighs just 64 grams and offers a battery run-time of over 16 hours. If money is no object, this is likely the rear light we’d pick. 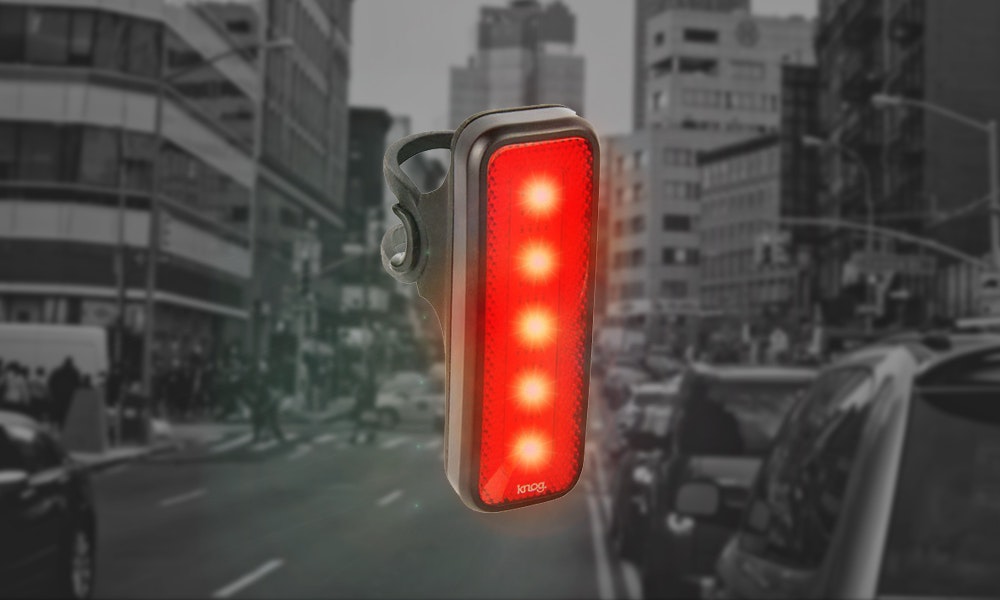 Known globally as ‘that Aussie cycling company’, Knog got its start in LED safety cycling lights. These days the brand's quirky designs are perhaps copied more than any other.

With an extensive range, it was a struggle for us to pick a favourite from the brand, but it’s the Blinder Mob V Mr Chips that gets our vote. This rear-specific, waterproof light offers 44 lumens at peak output from its chipboard style surface-mounted LEDs making is visible from up to 1.2km away. At its brightest strobe setting, the battery will last for around 3 hours and up to an astonishing 53 hours on eco flash.

The charging plug for this light is built directly into the back of it, with no wires required. However, the snap-fit mounting straps are our favourite part. Here three different sizes are given to ensure fitment to all seatpost shapes and sizes, including aero seatposts! 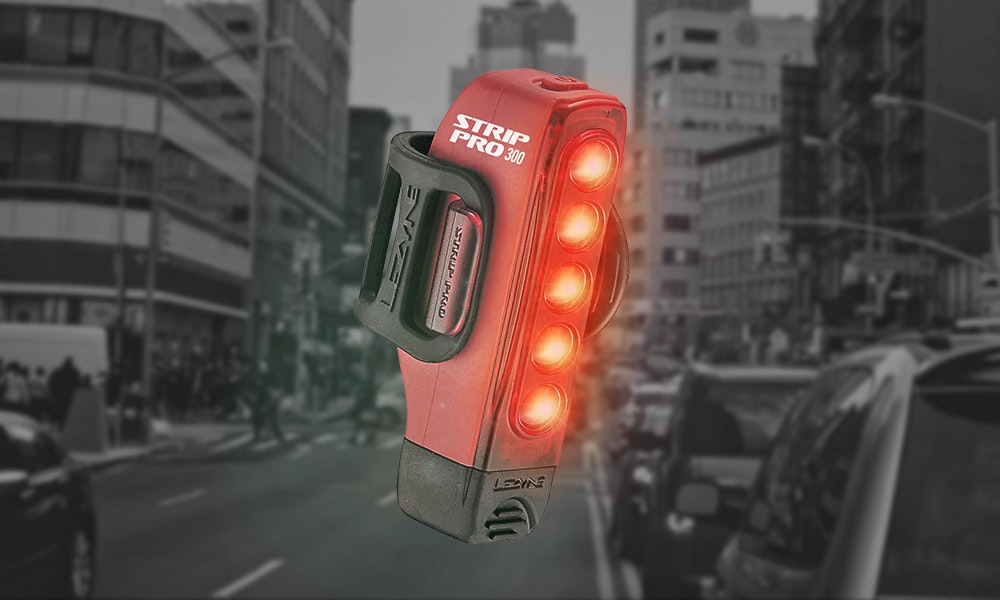 Often sold as a set with the Hecto Drive 400 XL listed above, with 300 lumens of bright red light, the rear-specific Strip Drive Pro packs a serious punch to ensure you are safe and seen when out riding.

The Strip Drive Pro is IPX5 waterproof and offers up a claimed battery life of three hours on its 300 lumen day flash mode, and up to 20 hours on a more modest eco flash setting. The lens of the Strip Drive Pro is claimed to increase side visibility whilst the included rubber mounting strap is also aero seatpost friendly. 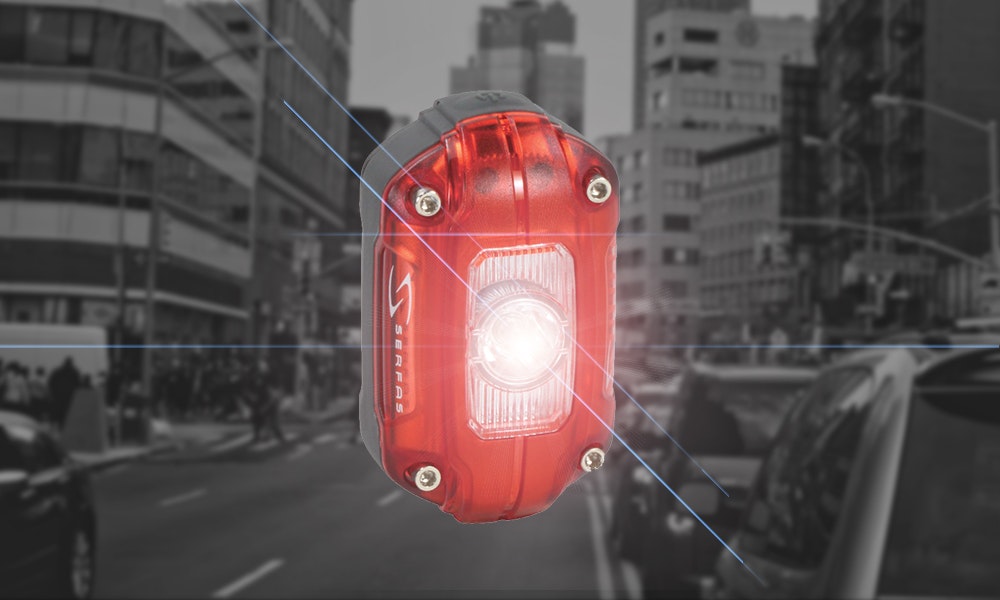 Built with a solid waterproof plastic housing, the Guardian has a peak output of 100 lumens coming from its single LED bulb in day flash mode. Weighing in at a claimed 38 grams, the Guardian is amongst the lightest on this list and includes a range of silicone mounting straps compatible with a wide range of seatpost shapes.

Serfas claim a battery life of between two and a half hours on a high steady high (60 lumens output), and 14 hours on a low (35 lumens) output flash setting. In addition to a solid battery life, the Guardian also features an audible alarm system when the battery level reaches under 10 minutes of runtime remaining. 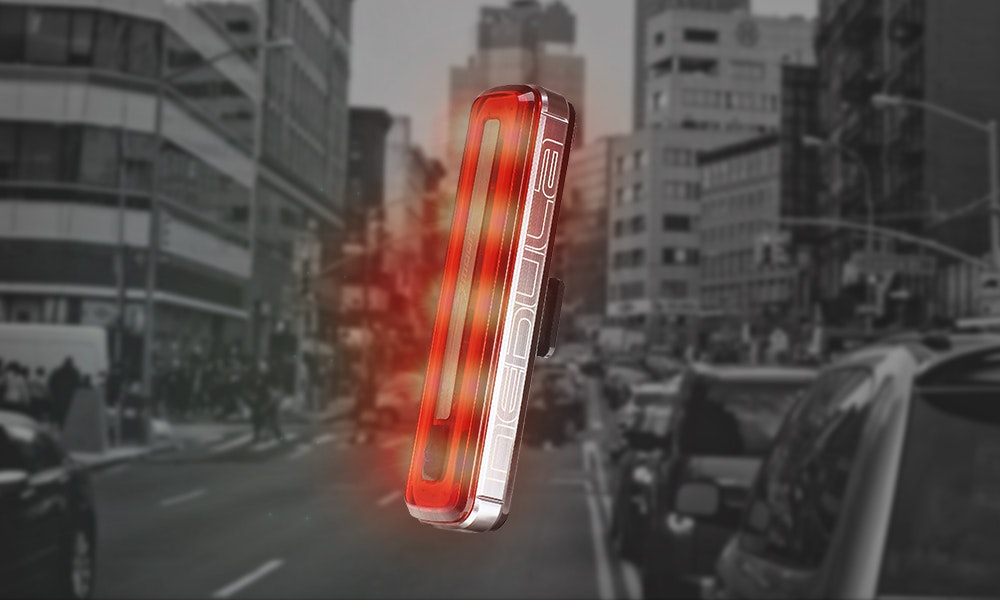 Sharing a somewhat different aesthetic to others on this list, the Moon Nebula taillight features an impressive the claimed output of 100 lumens from its 50 LED chips.

With eight different modes on offer, expect battery life to range from one hour on the ‘overdrive’ (100 lumens steady) setting through to in excess of 20 hours on an eco flash setting. The seatpost mount is as aesthetically clean as the light itself, however, the optional saddle mount looks to provide a particularly neat mounting solution for those wanting to keep their seatposts uncluttered.

Confused by lux, lumens and what to look for in a bike light? Check out our ultimate guide for all you need to know about lighting up your ride. 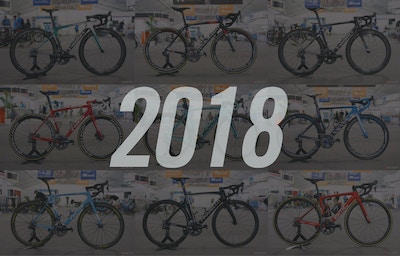 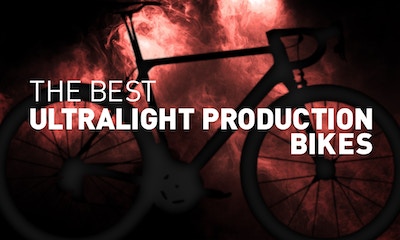 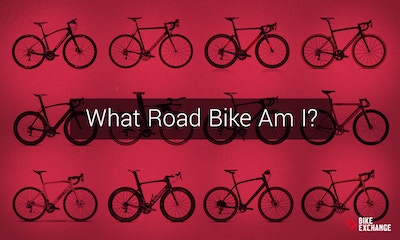